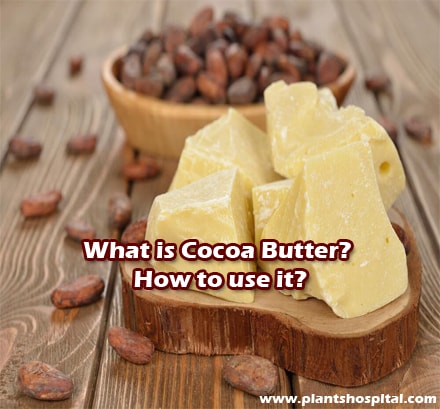 Cocoa butter is the stimulant property of the alkaloid, known as theobromine, found in cocoa, which is the main ingredient in chocolate making. At the same time, this substance is a good diuretic. Cocoa butter extracted from cocoa seeds is widely used in the cosmetic industry and pharmacy. Cocoa seeds are crushed and powdered, and this powder is used to make chocolate.

What is Cocoa Butter? How to use it?

Cocoa, which stands out with its deep-rooted history dating back to the Mayans, was mixed with water and spices in ancient times and used for religious rituals. Cocoa, which arrived in Europe with the Spanish invasion, began to be drunk mixed with milk, and very soon became quite popular.

When the seeds of the cocoa tree are fermented and dried, its specific bitter flavor disappears and it has a pleasant aroma and flavor. The cocoa beans that are fermented and dried are roasted and turned into flour and the oil is removed. Cocoa powder is obtained from cocoa flour which is then ground again. Unsaturated cocoa seeds are used in chocolate making.

Cocoa powder, which is taken from the oil, can be drunk by adding milk or added to pastries such as cakes, cookies, cakes. Having a long shelf life, this butter is widely used, especially in the cosmetics and food industry.

Cocoa butter, which has a stable structure, can be preserved for long periods without pity and sourness. The melting point of the butter, which is in a solid-state at room temperature, is 34 degrees.

What Are The Benefits Of Cocoa Butter?

• Cocoa butter acts as a moisturizer that prevents the skin from drying out. It helps treat damage to these plates by absorbing them to the lower layers of the skin. Cocoa butter, a rich source of saturated fatty acids, provides moisturizing of cracking and drying skin, shortening the healing process.

• Cocoa butter, which has high antioxidant components, has positive effects on heart health and cognitive functions.

• It can be used by mixing with oils such as cocoa, jojoba, coconut oil, argan oil without additives.

• It forms a protective layer on chapped lips and protects lips from very hot, very cold, and harmful rays of the sun.

• The polyphenol components contained in it reduce the effects of aging and help alleviate skin problems such as dermatitis. Polyphenol components, which also have an antioxidant effect, increase collagen production, and moisturize the skin. This  butter, which allows the skin to have a more elastic texture, also repairs damage to the skin tone. 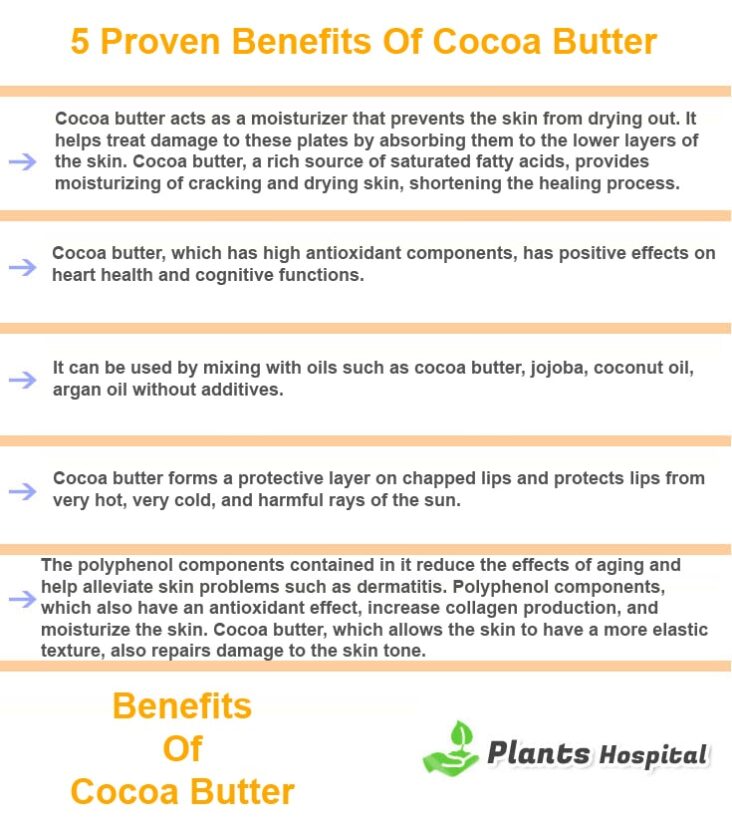 1. It provides a faster recovery when applied to wounds without mixing with any product.

2. It can be used easily for sensitive skin by mixing with cocoa butter, aloe vera gel, and tea tree extract, which have a soothing effect on burns and infections.

3. Cocoa applied to recurrent wounds in the mouth keeps wounds moist and prevents them from reappearing.

4. Since the saturated fat in content is vegetable-derived, it has the effect of reducing the risk of cardiovascular diseases. Cocoa, which affects reducing inflammation thanks to its polyphenolic components, prevents the hardening of the arteries.

5. Thanks to positive effects on fat metabolism, it minimizes the risk of health problems such as heart attacks.

6. Supporting the body’s immune system with antioxidant polyphenol compounds, the butter helps to prevent cell mutation and at the same time, it has a protective effect on brain health by improving hormonal balance.

7. So, is cocoa butter rubbed on the face? It is especially recommended to apply cocoa butter with a light massage on dry skin that needs moisturizing.

8. Does cocoa butter, which stands out with its positive effects on the scalp, darken the hair? Regular use of cocoa helps hair darken. However, the darkening rate is only 1-2 tons.

How To Use Cocoa Butter?

A homemade lip feeder can be made by mixing grapefruit, orange, mint, lemon, and vanilla oils. Home-made lip balms, which make the lips moisturize and smell nice, also help heal cracks in the lip.

It is most commonly used in chocolate production. Because of its beneficial effects on the skin, cocoa butter is found in its pure form in lotions and creams.

So, how to use for tanning cocoa butter? Due to the pigments that give cocoa color, cocoa is used as a structure bronzer, which helps the skin to tan faster.

Cocoa, which has healing properties of wounds and burns, can be applied to open wounds with the help of cotton. Shaving gel can be prepared with cocoa butter that can soothe the worn skin after shaving.

Cocoa dissolving in hot water is applied to the face after shaving in the form of a gel. Cocoa butter, which is applied to the skin after taking a shower, is easily absorbed by the skin and allows you to have both a pleasant smell and soft skin all day long.

Damages and Side Effects

Although cocoa butter draws attention with benefits, excessive consumption can cause serious problems from time to time, as in every vegetable oil.

Excessive consumption of cocoa with a high content of saturated fat causes the cholesterol rate in the blood to increase. High cholesterol can cause heart and respiratory problems.

Foods containing cocoa are also high in calories. It containing fatty acids such as palmitic, stearic, and oleic acid, and white chocolate are made in many varieties of sweets. Consuming more chocolate and dessert than necessary causes weight gain.

Excessive consumption of a variety of fats with a high content of caffeine causes sleep disorders. Those who suffer from sleep problems should pay attention to their cocoa consumption.

This butter, which triggers chronic headaches, also leads to an increase in migraine attacks. By increasing blood circulation, it can raise blood pressure. It can increase heart rhythm and cause chest pain.

Ingredients found in the butter can cause allergies in somebodies. In case of problems such as urticaria, burning of the skin, swelling, redness, and itching, it may be necessary to take the necessary precautions by going to the nearest medical facility.