Kombucha tea, known by Chinese as “elixir of immortality” of Far East for over 2000 years, is a beverage with enormous health benefits that extend to your heart, your brain and especially your gut.

How does this old beverage create such a big difference in your body?

Due to the fermentation process in production of kombucha tea, contains many healthy bacteria known as probiotics.

This bacterium aligns your digestive system and supports your immune system; because absorbs nutrients and struggles with infections and diseases.

80 percent of your immune system is found in digestive system and your intestine is second largest part of your neurological system.

Drinking kombucha tea every day can help protect your immune health, which provides an impressive range of benefits for your total health.

What is Kombucha Tea?

Kombucha tea is a fermented beverage containing black tea and sugar (from a variety of sources such as cane sugar, fruit or honey) used as functional, probiotic food.

Contains a bacteria and yeast colony that initiates fermentation process combined with sugar.

After fermentation, kombucha tea is carbonated and contains high concentrations of vinegar, B vitamins, enzymes, probiotics and acid (acetic, gluconic and lactic).

These bacteria are known as “cellulose-producing bacteria”; they produce cellulose that acts as a shield to cells.

Although is usually made with black tea, kombucha tea can be prepared with green tea. Contrary to general claims, Scooby is not a kombucha fungus.

It may be a bit complicated to find where to buy kombucha tea, but is usually sold in natural healthy food stores and in some markets.

People have concerns about kombucha calories.

Although nutritional properties will vary according to brands and homemade brewing patterns, in general content of nonfat and organic kombucha tea is as follows: 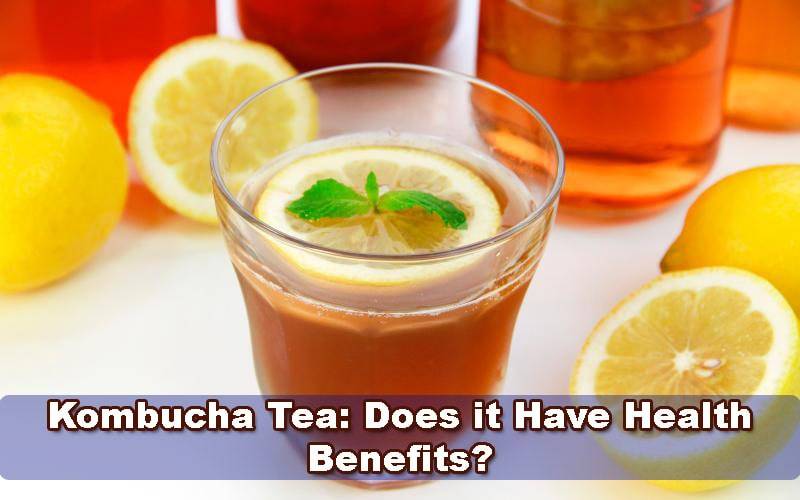 ✔ While kombucha tea offers a lot of health demand that focuses on path of intestine (which contributes to self-immunity), there is a well-confirmed evidence that this tea contains strong antioxidants and that this substance can help detoxification.

✔ Protects against diseases to body.

✔ In origin of most diseases, ability to fight against these diseases is a way of reducing inflammation of antioxidants.

✔ This inflammation reducer, nature of detox is probably a reason why kombucha tea can potentially reduce risk of cancer types.

✔ One reason for this is that antioxidants reduce oxidative stress that can damage cells until they reach DNA.

✔ Exposure to processed foods and chemicals in your environment can cause this stress and contribute to chronic inflammation.

✔ Although regular black tea contains antioxidants, research shows that fermentation process of kombucha tea produces antioxidants that are not found in black tea, such as glycic acid.

✔ It was also discovered that in December 2016, quercetin was found to be an metabolite of isorhamnet. Quercetin (quercetin) is associated with longevity and great anticancer properties.

✔ Research from University of Latvia in 2014 says that consumption of kombucha tea “depends on four main features: detoxification, anti-oxidation, energy-efficient potency and promotion of depressive immunity.

✔ Kombucha tea can be useful for many infections and diseases.

✔ However, greatest cause of kombucha to promote digestion is due to high levels of useful acids, probiotics, amino acids and enzymes.

✔ Some studies have demonstrated ability of kombucha to prevent and improve gastric ulcer.

✔ Although kombucha tea contains bacteria, they are not harmful pathogens.

✔ Instead, they are useful species competing with “bad” pathogen bacteria in intestinal and digestive tract (called“apathogens”).

✔ Kombucha tea not only helps digestion, but also protects your mind. The reason does this is because of B vitamins.

✔ B vitamins, especially vitamin B12, are known to increase energy levels and contribute to overall mental well-being.

✔ Depression can be an important symptom of a leaky bowel, especially because of way bowel permeability contributes to inflammation.

✔ In addition to various other features, kombucha’s ability to regulate “bowel-brain axis communication” demonstrates that is particularly useful for employees, especially under astronauts and extreme working conditions (such as miners), to prevent or minimize effects of anxiety and depression.

✔ Another advantage of Kombucha is that it is used as a potential treatment for silicosis, a lung disease caused by repeated exposure to silica particles.

✔ Chinese scientists have discovered that inhalation of kombucha tea may be a way to treat lung diseases caused by inhaling dangerous substances.

✔ This seems like a pretty suspicious thing, doesn’t it? But is true;

✔ Because of bacterial species found in kombucha, drinking live cultures actually destroys bad bacteria responsible for infections. In laboratory studies, was found that kombucha had antibacterial effects against coli bacilli.

Helps in Treatment Of Diabetes

✔ Although some practitioners warn against diabetes, some studies suggest opposite. Of course, without high sugar load you consume kombucha, we assume that.

✔ Especially because of functions of antioxidants in kombucha tea, is seen that sugar helps to alleviate he symptoms and fermented anti-diabetic black tea is more efficient.

✔ This is especially true in terms of liver and kidney functions, which are usually weak for those with diabetes.

✔ Because of liver helps to filter and convert harmful compounds, is a vital component in digestion and general health.

✔ Antioxidants in kombucha tea can protect liver from oxidative stress and damage caused by overdosage of acetaminophen.