Green Tea May Be Inconvenient In Some Cases

First, it has a caffeine-related drawbacks. Green tea, like any tea, contains caffeine. First of all, we need to accept: excessive caffeine intake has been associated with irritability, tenderness, and anxiety.

People who are not accustomed to caffeine experience even more trouble, which means that even with a small amount of green tea, they experience symptoms.

Also, it can disrupt your body’s ability to absorb iron, and this is a big problem. Iron deficiency can bring you a series of serious health problems. Nobody wants that. Also, it interacts with some medications.

A study over the past decade has suggested that the link between green tea and cancer prevention is weak and contradictory. This is also the case for dementia and Alzheimer’s. Another study found a poor link between the intake of green tea and a reduction in cholesterol levels.

Excessive green tea may cause excessive caffeine overload, which can then cause symptoms such as insomnia, nausea, tremor, and restlessness. Of course, this is more pronounced in people who suddenly tend to consume too much green tea. In other words, if you are sensitive to caffeine, you are more sensitive to side effects.

According to studies, up to 400 mg of caffeine, a day is safe for most adults. This is roughly equivalent to 4 cups of brewed coffee, 10 cans of cola or energy drink and 10 to 12 cups of green tea. To avoid the side effects of green tea, it is necessary to consume moderately. There is no problem unless exaggerated.

Also, the quality of tea is important in terms of not experiencing symptoms. 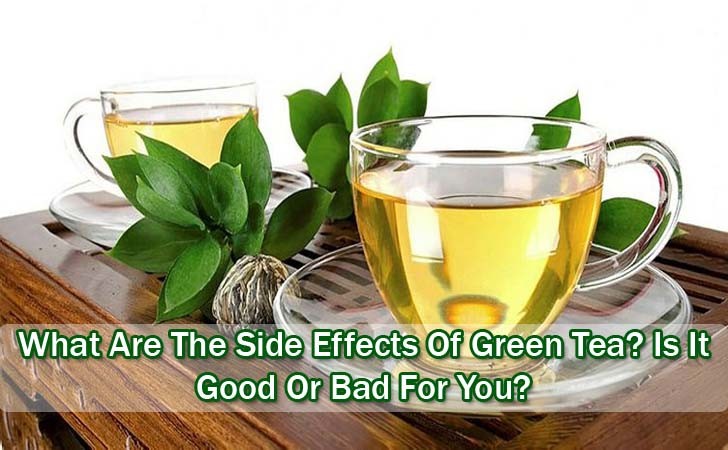 What Are The Side Effects Of Green?

Can Cause Stomach Problems

Caffeine may be the most senior culprit. Although it contains a smaller amount of caffeine than other types of tea, it can still cause problems. This is because caffeine increases the amount of acid in the digestive process.

This can cause pain or nausea. Also, it has been recommended for the treatment of stomach cancer, although studies indicate there is insufficient evidence for this. According to a report by Rochester Medical Center, if you have stomach pain after drinking this tea, visit your doctor immediately.

May Cause Iron Deficiency and Anemia

According to a study in Taiwan, consuming too much green tea can cause iron-deficiency anemia. More importantly, drinking this tea after an iron-rich meal can bind the main compounds in tea to iron. If this occurs, green tea will lose its potential as an antioxidant.

EGCG is the main ingredient in this tea. This compound is known to block an enzyme called myeloperoxidase that causes inflammation. However, when tea is consumed together with iron-rich foods, EGCG loses its ability to inhibit the inflammatory effect of myeloperoxidase, which leads to inflammation. In other words, the food you eat is also the factor that determines the benefits of green tea.

It contains tannins that prevent the absorption of iron from food and food supplements. Some sources say it may be wrong to add this tea with lemon or drink after meals.

Further research adds that the consumption of green tea can reduce iron absorption from plant-derived sources by up to 64%. To prevent this, you can drink at least an hour before or after meals, and you can also increase iron absorption if you consume more nutrients that are rich in vitamin C.

It Can Cause Headaches

Again, caffeine can cause mild and severe headaches because of green tea. Also, iron deficiency through excessive intake of this tea can cause headaches. It can also cause dizziness. And according to studies, the maximum tolerated dose of green tea in humans is 9.9 grams per day, which is equivalent to 24 cups of drink in one day.

An important point to note is this: Although more than 100 prescription herbal supplements and green tea extract in the preparation, it has not been explicitly approved by the FDA for use as a treatment for any discomfort. Furthermore, the safety of long-term use of this tea extract is not clearly defined. 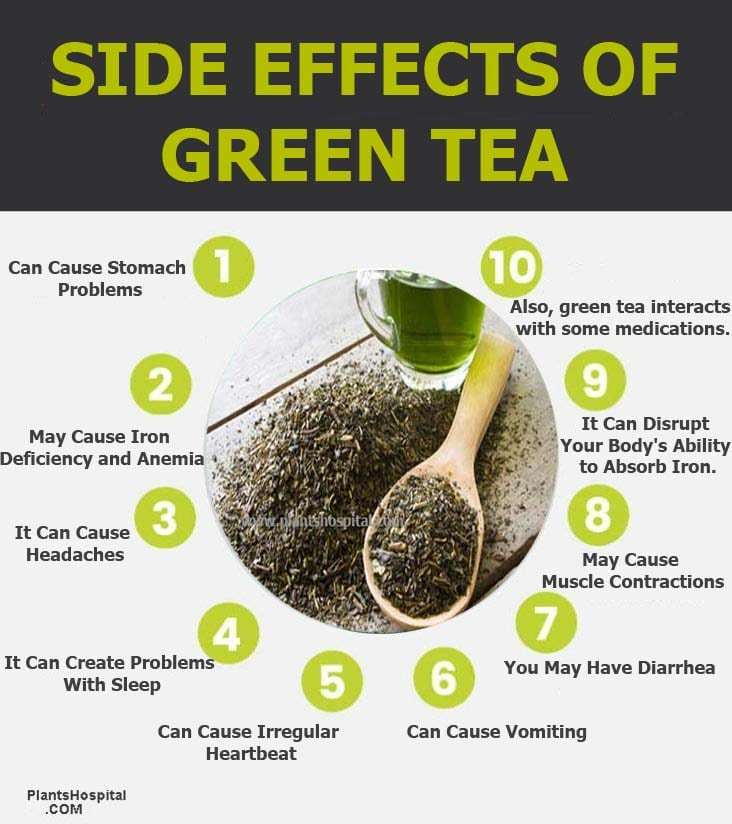 It Can Create Problems With Sleep

Another possible bad effect of green tea is sleep problems. This problem can be avoided by limiting the consumption of this tea because the lethal dose of caffeine in green tea is estimated at 10 to 14 grams per day.

Drinking this tea late in the day can also cause this effect. One of the most prominent causes of the condition is the amount of caffeine that activates the nervous system and prevents one’s sleep.

More importantly, pregnant and lactating women should limit their intake of this tea as it can pass into breast milk and cause insomnia in lactating babies. A report by the University of Southern Illinois states that taking too much this tea can cause many other sleep disorders.

What Are the Side Effects Of Eating a Banana Every Day?

Can Cause Irregular Heartbeat

Caffeine in charge again! Caffeine is known to stimulate the heart. It causes the heart to speed up and beat irregularly fast, a condition called tachycardia. This makes it feel like your heart is pounding on your chest.

You may also realize that the heartbeat is more than ever. This condition, also called palpitations, can cause chest pain and compression. A change in your Normal heart rate can pose a serious threat. According to another report by the University of Utah Health, you should not consume this tea if you suffer from heart disease or irregular heartbeats.

According to an Indian study, polyphenols in green tea can cause oxidative stress. Caffeine in green tea can trigger nausea and vomiting. The acceptable amount of caffeine is reported to be 300 to 400 mg per day. If you exceed the limit it can cause some side effects, including vomiting.

You May Have Diarrhea

You may have diarrhea if you have just started consuming it. Diarrhea can also occur with excessive consumption of green tea. One way to stop this is to reduce consumption. Another way is to avoid drinking green tea on an empty stomach. Instead, you can consume tea with food.

This is because food in your stomach can potentially reduce the bad effects of caffeine.
In case of severe diarrhea, stop the intake of green tea and consult your doctor immediately. Mild diarrhea may be common. However, if it reaches serious dimensions and does not stop you should see a doctor.

Are You Eating Too Much Tomato? – What Are The Side Effects Of Tomato?

May Cause Muscle Contractions