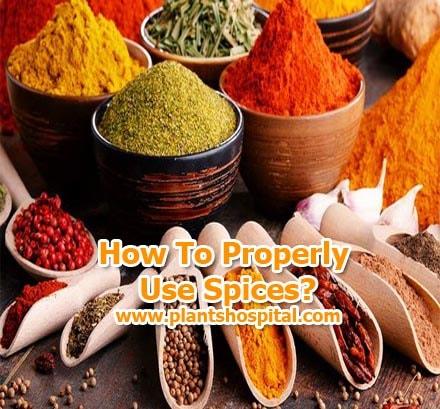 Spices that add flavor to food with their aromas also have numerous benefits for health. Spices that provide benefits in many different areas, from regulating sugar and cholesterol to strengthening metabolism, from suppressing cancer cells to those that contribute to shrinking the tumor, can threaten health if not used correctly.

Spices especially those with chronic diseases named Ulas Özdemir Anadolu Health Center Nutrition and Diet Expert saying that you should use more carefully, ginger, cinnamon, pepper, cloves, such as shared important information about the use of spices in daily life.

Ginger, which is used as antibacterial, antiviral, anti-inflammatory, is the most reliable remedy for nausea during pregnancy when consumed as a tea.

Ginger tea is also effective in nausea that occurs on the long road. The antitumor effect can help suppress tumor growth in difficult-to-treat types of cancer by consulting a doctor.

Some studies show that ginger reduces muscle aches and menstrual pain in women playing sports, and is a major contributor to respiratory diseases, cough, flu, and cold.

It strengthens the immune system. However, it should be remembered that may be inconvenient for those who take medication related to blood pressure and sugar.

Cinnamon, which is known for balancing blood sugar and recommended to diabetic patients with this characteristic, may interact with certain diabetes drugs.

Diabetics need to consult their doctor about the use of cinnamon. Cinnamon, which has a balancing effect on cholesterol, also has antioxidant, antiseptic and antibacterial properties.

Cinnamon, which helps prevent blood clotting, facilitates digestion thanks to its rich fiber content. It reduces the risk of cancer cells multiplying in leukemia.

Chewing or smelling cinnamon gum strengthens memory, can be used as an aid in diseases such as Alzheimer’s.

Turmeric, which is from the ginger family and is also known as Indian Saffron, has similar uses to saffron. Turmeric, which has anti-inflammatory, antioxidant and antitumor properties, is used in diseases such as Alzheimer’s.

It can be used in addition to treatment for colon, prostate, pancreatic, breast cancers, but it is important to consult a physician beforehand.

It reduces pain in arthritis, pancreatitis, inflammatory bowel diseases. It is a natural preservative against gallstones.

It regulates blood pressure and has protective properties against osteoporosis. Those who want to include turmeric in their daily diet can add to food such as rice, pasta, meat food, eggs, soup.

Clove, which is recommended for most dental and gum diseases, can also be used as a local anesthetic. Cloves, which are also effective for bad breath, are good for bloating when consumed in water and tea.

It can be used in immune system diseases such as ginger, cold and cough, which draw attention with its omega-3 and omega-6 properties, which are very rare in plants. It is perfect for blackheads, pimples, skin blemishes.

Cloves, which are recommended to be consumed as spices and tea, can turn into a product that causes harm rather than benefit when consumed as oil.

Clove oil, which children should never use, can cause irreversible serious side effects in the stomach and intestines and can cause damage to the body.

Against Blackheads And Acne: Cumin

Cumin, which balances blood sugar, regulates the skin, helps to treat blackheads, acne, old-age wrinkles. Because of high iron content, cumin, which is very effective in the treatment of anemia, fights asthma and strengthens the immune system.

It is recommended not to use excessive consumption cumin, which can harm the liver and kidneys, which may cause miscarriage during pregnancy.

Rich in omega 3 fatty acids and dietary fiber, flaxseed supports the digestive system and healthy functioning of the intestines.

It helps to keep in balance blood sugar and cholesterol. With this feature, flaxseed, which is also protective against heart and vascular diseases, reduces the risk of breast and prostate cancer.

It can be used in salads by kept in water.

Chia seed is rich in omega 3, 6 and fiber content. It balances blood sugar and cholesterol. It lowers the risk of cancer due to antioxidant properties.

It can be used in many popular recipes, such as pudding, eggs with milk, with gelling features in milk and water. It soothes the feeling of hunger because of swells in the stomach.

Blood pressure patients should use in consultation with a specialist.

It also increases the absorption of vitamins and minerals from other foods eaten together with the compounds in Flake pepper, which are used as anti-inflammatory and gas relievers.

Because of contains high amounts of vitamin C, flake pepper, which is known as a natural antibiotic, is a miraculous nutrient for the body.

Flake pepper, which strengthens the immune system and metabolism, can be used as an antidepressant.

It should be remembered that pepper, which also helps in the suppression of cancer cells, may interact with certain drugs.