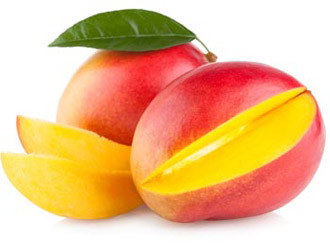 Mangos are the succulent, aromatic fruits of an evergreen tree (Mangifera indica), a member of the cashew family (Anacardiaceae) of flowering plants.

Botanically, mango is a drupe, consisting of an outer skin, a fleshy edible portion, and a central stone enclosing a single seed – also called stone fruit, like plum, cherry, peach.

Mangos flavor is complex and may be dominated by the compounds that characterize peaches and coconuts (lactones), generically fruity esters, medicinal or even terpenes, and caramel notes.

Generally, the sweeter a fruit is, the tastier it is; but even a sweet fruit will seem one-dimensional without some counterbalancing acidity.

The vanilla aroma notes in fresh mangos rounds out the flavor and makes it more complex.

• The mangos are thought to have originated over 5,000 years ago in the Hindu-Berma region, which extends from eastern India and southern China across Southeast Asia.

• Mangos seeds traveled from Asia to the Middle East, East Africa, and South America beginning around 300 or 400 A.D.

• The cultivation of mangos began slowly moving westward with the spice trade. The Portuguese, who landed in Calcutta in 1498, was the first to establish a mangos trade.

• Spanish explorers brought mangos to South America and Mexico in the 1600s.
• Mangos is a staple in the cuisines in all of the tropical and subtropical countries where it’s grown, from Southeast Asia to South America.

• There are over 1,000 different mangos varieties grown throughout the world.

• The first attempt to introduce the mangos into the U.S. came in 1833 to Florida. The mangos has had a tumultuous history in Florida, due primarily to weather, minimizing the commercial production of the fruit in the early 1990s.

• A very small percentage of fresh mangos available commercially in the U.S. are grown in south Florida and southern California.

1. Mangos is effective in relieving clogged pores of the skin.

2. Mangoes are one of the best sources of the phytonutrients: betacarotene, quercetin, and astragalin.

3. These are powerful antioxidants that neutralize free radicals.

4. Mangos are a rich source of vitamin A(beta-carotene), E, and Selenium which help to protect against heart disease and other ailments.

5. The phenolic compound found in mangoes has been found to have powerful antioxidant and anticancer properties.

6. Being high in iron, mangos are said to be very good for pregnant women as well as for people suffering from anemia.

7. Mangos is believed to be effective in relieving clogged pores of the skin.

9. Mangos are quite helpful in treating acidity and poor digestion.

10. The anti-inflammatory properties of mangos might help alleviate asthma symptoms.

11. Mangoes are a great source of pectin, a soluble dietary fiber. What Are The Benefits Of Mangos?

One small mango provides a quarter of your recommended daily allowance for vitamin C, nearly two-thirds of your daily quota for vitamin A, good amounts of vitamin E, and fiber.

They also contain vitamin K, phosphorus, and magnesium. Mangos are particularly rich in potassium which can help reduce the risk of high blood pressure.

Mangos also contain pectin, a soluble dietary fiber, which has been shown to lower blood cholesterol levels. Recently, scientists at the Institute for Food Research discovered that a fragment released from pectin binds to, and inhibits galectin 3, a protein that plays a role in all stages of cancer progression.

Other population studies, including the European Prospective Investigation of Cancer, have identified a strong link between eating lots of fiber and a lower risk of cancers of the gastrointestinal tract.

Mangos are considered a ‘high volume’ food which means you get a lot of food for a relatively small amount of calories – one mango contains around 135 calories. However, they are quite high in natural sugar with one mango containing around 30g.

Nowadays, particular attention is paid to nutrients capable of counteracting oxidative stress. A certain number of reactive oxygen species, or ROS, including superoxide anions, hydroxyls, and hydrogen peroxide, are produced in the human body.

Some of them, such as superoxide anions and hydrogen peroxide, are physiologically generated during the electron transfer in the mitochondrial respiratory chain.

Other species, as the hydroxyl radical, one of the more dangerous ROS, is produced by the Fenton reaction, causing the oxidation of Fe2+ to Fe3+ These derivatives of oxygen, highly unstable and particularly reactive, oxidize atoms or organic molecules, especially cell components such as proteins, lipids, and nucleic acids.

Inflammatory bowel diseases, primarily including ulcerative colitis, are disorders that are characterized by chronic inflammation and mucosal damage in the large intestine.

This is associated with an increased risk of colon and rectal cancers. Although the exact etiology of this disease is not fully known, the mucosa of patients has been shown to produce large quantities of pro-inflammatory cytokines, such as IL-1, IL-6, IL-12, and TNF-α.

These, in turn, induce the expression of enzymes associated with inflammation, such as iNOS and COX-2.

The expression of pro-inflammatory cytokines is regulated by the nuclear factor kappa-B (NF-κB), a transcriptional factor whose level has been found to increase in the mucosa of inflammatory bowel disease patients.

Nguyen et al. showed that a methanol bark extract of mangos exerts cytotoxic effects in pancreatic cancer cells that correlated, among the isolated bioactive compounds, with mangiferolate and shambolic acid.

Furthermore, an aqueous extract of mango mesocarp has been reported to exert antitumor activity in a human colon adenocarcinoma cell line, as well as in a rodent model of colorectal cancer.

Although only mesocarp is the edible fraction of the fruit of the mango, some cultures also used to eat the mangos exocarp, probably knowing that the fruit peel contains a significant amount of healthful compounds that are present only in small amounts in the mesocarp.

However, exocarp consumption can also promote an allergic reaction in some people because of either the presence of the oily organic allergen urushiol in the fruit peel or the presence of pesticides used to counteract bacterial infections that can seriously affect plant life. Other Cases Where Mangos is Beneficial